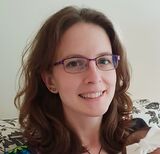 I’m Natalie, an artist living and working in Princes Risborough, Buckinghamshire. I grew up in Twickenham, Southwest London, which is where my love of art began. As a child, when asked by adults what I liked doing, the answer was always ‘drawing and making things’ and it is something I've never grown out of, thankfully. It can often feel that the world would rather we did grow out of the arts. Curriculums rarely value them as much as the ‘sensible’ subjects even though creativity is so good for our well-being. As adults it can become something that we shy away from.

So I did not study art. At 18 I started training to be a nurse but swiftly discovered it was not for me. At 19 I began an art foundation course at Chelsea art school. I wanted so much to learn good drawing and sculpting skills but what I learned was that the fit was not right. My tutor explained that these skills are no longer required in art, that the world has been there and done that and moved on. So without further ado, I left. At 21 I studied Psychology and under a lot of pressure to own that so-thought-important piece of paper, I pushed on through and successfully completed the course. Alongside all of these courses I worked many different jobs including retail, bar work, archiving and office work.

Feeling somewhat lost, the one constant throughout that time was indeed still drawing and making things. I did several ad hoc short courses in drawing, sculpting, pottery and illustration but for the most part I am self-taught. I attended the art school of life where I observed with deep interest the world and people around me and recreated those observations from my own perspective in the form of pencil and paint whenever I could. I experimented with different materials and techniques, I read books, I went to galleries, I took part in the odd exhibition and art fair, I sold a few paintings and sculptures but never allowed myself to be fully immersed in the dream because it wasn’t ‘sensible’ and worse still, I believed I didn’t deserve it.

Becoming a mum to my two daughters shook my world and turned it on its head. Aside from no longer having time or energy for creativity, emotional struggles began to set in because, you know, they can and do catch up with us eventually. Art has increasingly become a therapeutic tool and I have learned to aim for the rewards in the process of making and not just for the end result. I value it now more than ever and, working through the struggles, I am finally allowing myself to work as the artist who has followed me around all this time.
Next
Previous